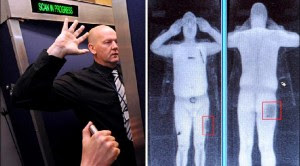 Email ThisBlogThis!Share to TwitterShare to FacebookShare to Pinterest
Labels: News

Will I be going through all this when I travel in few weeks ;/

It's very revealing. Check older pictures of those scanners and you'll see samples of females scanned.

Not to mention the radiation emitted from those scanners. I wonder about their effect on pregnant women & their babies...

MBH, I don't think they'll do it to pregnant women, but can you blame them!

bloggylife: Yes they will. Cause an idiot terrorist will dress like pregnant woman!

Actually the photos captured at Manchester airport, UK not US.
The scanners are old they came out after 9/11, now the dutch authorities are concerned about possible terrorist attacks and want to use the scanners for passengers traveling to US, because last month a Nigerian man hid explosives in his underwear, he was a passenger traveling from Amsterdam to US.