Washing Hands Before Surgery: The Story 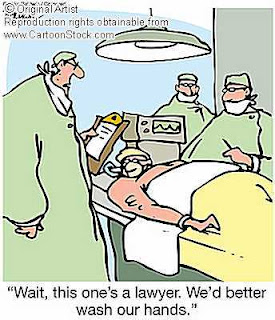 You may have assumed that washing hands before surgery is the most natural thing to do (I did) but it wasn't. The credit goes to the Austrian physician Ignaz Semmelwies.

In the 1840s, Semmelwies studied maternity clinics in Vienna, he noticed that clinic B had a mortality rate of only 4% while clinic A's rate was 10%. Both clinics were the same but Semmelweis noticed that patients were more likely to die when doctors treated them just after leaving the autopsy room. He found out that mortality rate dropped from 12% to 2% if doctors and nurses at the clinic washed their hands before seeing each patient!

Semmelweis found huge resistance, maybe because he didn't effectively know how to explain his point of view. Doctors didn't see why would they need to wash their hands that many times, they thought it was only a waste of their valuable time. Semmelweis was eventually forced to leave. After a nervous breakdown, he ended up in a mental hospital and died at the age of 47.


I read the story in the book: Super Crunchers By Ian Ayres.
The full story with all the details is available in Wikipedia.
At 4:28 AM

Email ThisBlogThis!Share to TwitterShare to FacebookShare to Pinterest
Labels: Books, did you know?

is it even true?

According to the book and wikipedia, it is true :p

i would've thought the hand-washing thing was always common sense.. but obviously it wasn't so back in the day.
maskeen!

But interesting figure. Wonder how that relates to washing hand before making food in restaurants. I don't wanna mention the name of the famous brand in Kuwait which the worker doesn't wear gloves (as they will melt), and didn't wash his hand after going to bathroom. Just think about it

atoona: me too! i thought its common sense!