A Movie to Watch: Seven Pounds 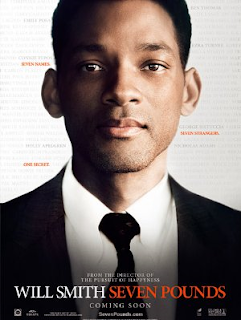 * Mom said that she cried in the movie!
* Today, a colleague of mine said that he cried too and he said that its even better than "The Pursuit of Happyness".

So if you have nothing planned for the weekend you may want to check the movie out. if you already had, tell us what you think.

I'll go myself If I had the chance, last time I went to the cinema was in August for "Tropic Thunder"!

Email ThisBlogThis!Share to TwitterShare to FacebookShare to Pinterest
Labels: Movies

I've heard so much about this movie... maybe I'll go watch it :)

I didnt find anything in the movie to cry....i still think its just a good time pass!

maybe they are too emotional lol
:p

do u think we should go watch it?

any comedy movies that you recommend?

dont you have enough in your lives?

I think you should go and watch it...maybe I am the only one who feels like that about it :D

must put on a spoiler alert next time!

Bs too philosophical... madry wa7ashnee ishwaya... not something to watch if ur looking for a light happy fresh movie... if ur in a bad mood, it will make it worse...

I went for that movie but didn't find a nice seat so I went for "Yes Man" and damn it was a lot of fun! :D

I am soooooo thrilled to watch it!!

I will wait for Bahrain cinema to release it

im thinking of going tomorrow, most of my friends watched it, and they say its a movie to cry!!!

Does it have to have tears?
I liked pursuit for being the true story of a pursuit of happyness. I'll look into that... on Amazon!

Fastidious Babe: its ok :p
you should put an alert next time :p:p


His Sweetheart: hopefully u'll watch it :) and most important that u like it :)


Bashar:
"Does it have to have tears?" lol unfortunately yes

Finally I saw Seven Pounds and, well, it was pretty dramatic but I think the story line is way "over the clouds" and The Pursuit of Happiness is much more dramatic and a million times more realistic.

Thanks for adding me to your blog list, Nemo!

I personally enjoyed "Pursuit of Happyness" a lot more.
I believe the ending of Seven Pounds was naive, pretty guessable too. Me and my friend sort of figured it out from the first 20 minutes so the exciting mystery part of it was lost, leaving only the sad parts, which don't usually appeal to me that much.

Smith's acting was still good though, he brought out the complexity of the movie (but I'm kind of in love with him anyways so my judgment is biased).

did you cry!? I sure did and the movie is simply dramatic beyond any expectation - I hate Drama but this one was ok! Tropic Thunder was stupid! I got it at home, waste of money to watch it at KNCC

and i still didnt watch it ;(
i booked and canceled 4 times :s