Book: The Brain That Changes Itself, Chapter 3 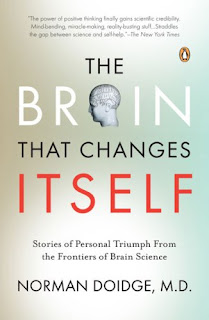 I just wanted to share some very interesting things that I have learned from the book "The Brain That Changes Itself"- Chapter 2.

(0) The brain is plastic. It can change its structure for better or for worse. We can change the structure of our brain and increase its capacity to learn.

(1) “If we stop exercising our mental skills, we don’t just forget them, the brain map space used for those skills is taken over by the skills we practice”.
(2) The reason why learning a new language when we get older is more difficult is not because the brain can’t change itself. It’s because when we’re older our native language has already dominated our linguistic map space and hence we really need to work harder in order to master the new language.
(3) At the beginning of learning a new task you need more neurons to do the work. After practicing, neurons become faster and more efficient and eventually fewer neurons are needed for the task.
(4) Merzenich knew that there is a critical time or window during infancy when the brain map gets its shape. During that period the brain can learn just by being exposed to the world.  “The learning machinery” is always on for them and that’s why they are able to pay attention to literally everything around them.

(5) Levi-Montalcini discovered the brain-derived neurotropic factor, or BDNF. BDNF is responsible for reinforcing plastic changes made in the brain during the critical period.
-BDNF release consolidates the connections between neurons and helps wiring them so that they fire together.
-BDNF promotes the growth of a thin layer around every neuron to speed up the transmission of electrical signals.
-BDNF turns on the “nucleus basalis” that allows us to focus our attention and keeps it on during the entire critical period.
-Finally BDNF helps close the critical period once the main connections are established, hence less plasticity in the system.
(7) Merzenich argues that some external factors during the critical period lead to the “massive premature release of BDNF” causing the critical period to close prematurely and the child is left with so many development disorders.
(8) Merzenich suggests that noise is a factor in the premature release of BDNF. Studies have shown that kids who live near the airports or train stations had lower intelligence.
This is not everything in chapter 3, there is a lot more!
Share your thoughts!
At 10:19 AM

Email ThisBlogThis!Share to TwitterShare to FacebookShare to Pinterest
Labels: Books