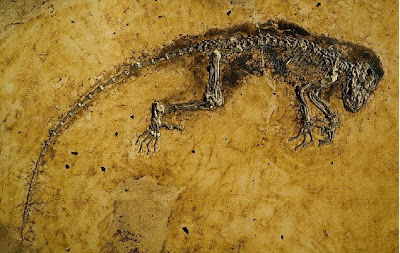 I have finally watched the "The Link" which was about the famous 47 million years old fossil scientists have recently presented as the missing link in the human evolution.

Ida was discovered in Messel pit, Germany in the 1980s. A private collector presented Ida to Prof Hurum at the annual fossil fair in Germany in 2006. Prof Hurum and a team of scientists had been studying Ida for 2 years.

"Ida" has nails, a hand, an opposable thumb and most importantly the "talus" bone which humans still have and which directly links Ida to humans as they claim.

The fossil has been named "Darwinius masillae" in honor of Darwin's 200th birthday.
The documentary explains the process of how they have discovered Ida and how they have reached the conclusion of "Ida" being the missing link in the human evolution.
Ida is currently displayed at the American Museum of Natural History (New York).
At 11:58 AM

Email ThisBlogThis!Share to TwitterShare to FacebookShare to Pinterest
Labels: Science

they mainly talk about how did they discover Ida and the so many tests they have performed on her to reach this shocking result ...

Cool. Where can I find it?

It's an amazing discovery, though I didn't like part of their conclusion that, looking at how the foot is designed, so human like, this is a clear proof of our ancestor in the evolution process, and this is the missing link.

1- Does that mean before this discovery there was no link, and I had a point in objecting to evolution?

2- That same foot can be used by creationist as a proof of the same God who created things similarly. So it works for both sides. It's just that scientists are the only ones making statements here.

At all rates, I would love to see it. All I saw was like 3 min video.

1- akeed u had a point and they are still investigating this, its not final.